On Dads And Cooking

Ragu recently did something really distasteful. They tweeted to influential dads and asked them if their kids liked it when they made dinner, with a link to a video of moms bitching about how their husbands suck at making dinner. C.C. Chapman wrote about it, so I won’t reiterate what he’s already said perfectly well, but you should pop over there and read what he says for a little more info.  My first thought was that this campaign was a bad idea from someone managing Ragu social media who doesn’t really understand social media. But the thoughts after that have turned to dads and cooking and all of the memory and emotion tied to both.

My mom did almost all of the cooking in our home. When I was young my father worked a lot and wasn’t home much, and when I got older my mom would get frustrated by a messy kitchen and my dad’s penchant for buying ingredients he only used for one meal. He usually cooked things he knew and loved, meals that built slowly and were made great by his constant attention and tweaking of spice and flavor. I don’t remember why he decided to make sauerbraten with a starter of cold pear soup one night, but I do know that I’ve never had one as delicious as that first time. No chicken was ever as moist as that which came buried in a pot of arroz con pollo. And while I’ve come to modify his chili recipe to make it my own, I still dump plenty of cumin in it, remembering the day my dad taught me that the “chili” taste I knew and loved came not from chili powder but from cumin. 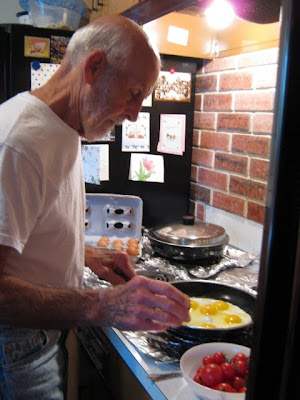 Image from Feathering My Nest

I cook exactly like the daughter of my parents would – I buy more expensive and exotic ingredients than did my mother, but I plan out menus and budget carefully the way my father never did until he started cooking and eating for just himself. Since I’ve been on bed rest, though, NJS has done a lot of cooking. By stepping back and letting NJS get a little creative, I’m seeing a side of his future dadness that I know our kids will come to love. He makes fantastic stir fry (mine is always too saucy, too salty, and too bland all at once.) His omelets are perfection. And he’s in the middle of perfecting his American Chop Suey with a hint of cinnamon.

One night when I was in high school, I went on a date. It wasn’t my first, but it was my first that didn’t also include the presence of a parent or older brother or other couples. I don’t even remember what that date entailed (probably the movies) but I remember coming home and finding my father awake in the kitchen. “Are you waiting up for me?” I demanded. “Nope. Soup is simmering,” he answered, my mother explaining to me the next morning that as soon as I’d left my dad had started chopping. Sure, it was a clever excuse to take out his aggression on some carrots and wait up to see what time I got home, but a dad knows that nothing, not even a boy who pays for the popcorn, can touch his daughter’s heart better than a bowl of soup her father has made for her.

My dad’s cooking meant a lot to him, and he did it to share his love and life with the people who mattered most. I see NJS putting more of himself into each meal he cooks and I know that to him, adding a sprinkle of goat cheese to my salad is a way for him to take extra care of his family. Don’t demean anyone in your life, especially not a dad, by assuming all they want to do in the kitchen, all they can do, is open a jar of sauce.

What are your favorite dad-made meals?

Side note: I googled “dad cooking” to find an image for this post and came across a lot of great blog posts by writers talking about foods they loved that they learned to love when their dads made them. Really sweet.

I'm a storyteller, food lover, book collector, and a Southerner at heart. I love connecting people.

Theme by Anders Noren — Up ↑